Another disappointing game week, we’ve pretty much maintained the same position in the leaderboard. As a result of falling behind early on this isn’t good enough in terms of playing catch up. Strangely though when I look at the team, I can’t see any obvious changes that I’d want to make. I’m fairly happy with the team on balance and when I look at other teams I think it looks much stronger. Having said that in an ideal world I’d want to replace Pieters and Baines, but this isn’t possible without removing one of the front six.

The only positive defensively was a clean sheet for Cahill. It was very disappointing that both Cahill and Walker missed out on clean sheets in the EFL cup due to late goals.

Sane, Hazard and Salah all picked up a decent amount of points. I’m reasonably happy with my midfield. I thought Sane was unlucky not to get more points against Spurs. However he is the one I’m keeping an eye on in terms of transferring out.

Lukaku grabbed a goal and the star man award. I wouldn’t say he’s back to his best but he’s consistently picking up points again now.

Pieters and Baines are currently adding nothing in terms of points and in Pieters case he is mainly taking points away from the overall total. At the moment I just can’t see a way of replacing him when his value is so low. The only obvious move is to take out Aguero. Baines is a similar dilemma, although his value is higher. I can’t see a player who I could swap him for at a similar price tag.

Aguero started against Spurs but was substituted fairly early on. From his reaction it was obvious he wasn’t happy with this decision. He would have probably got on the score sheet had he stayed on the pitch with City being awarded a penalty.

It’s a really difficult decision in terms of using the final two transfers. We haven’t been making up any ground over the last couple of game weeks but at the same time I’m fairly happy with the team other than Pieters and Baines. I don’t really want to lose Aguero just yet as not many other people have him, if he was to have a big game week this would be the best way we could climb the leaderboard quickly. I also can’t see another player who is consistently scoring every game week who would be worth bringing in. In my opinion we have the most consistent players in Salah, Hazard and to a certain extent Kane and Lukaku. As I’m fairly stuck for ideas, this week I’m looking for actionable suggestions in the comments below. With two transfers in the bank for December, what would you do with them given the current state of the team? 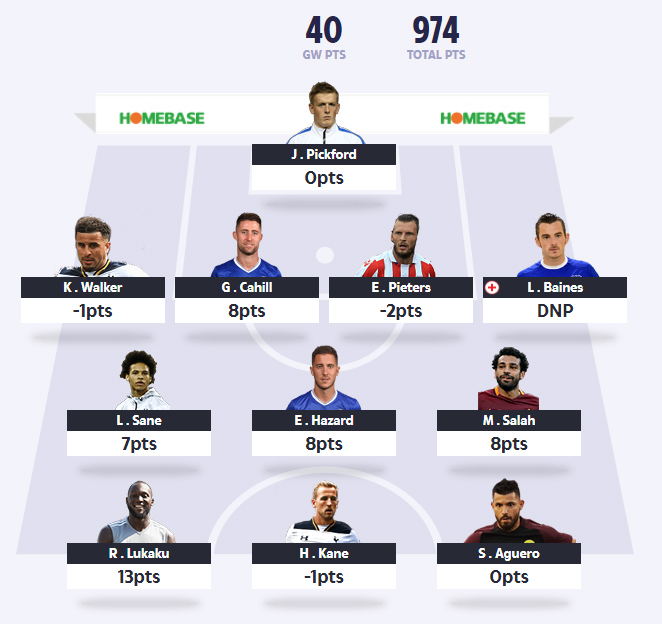 Liverpool and Arsenal face each other tonight so it may be worth avoiding making a move for any of their players. They do both however have better fixtures on boxing day with Liverpool facing Swansea and Arsenal facing Palace. The team with the best fixtures during game week 17 is Man City as they host Bournemouth and then travel to Newcastle. For me this is a good reason to hold onto both Sane and Aguero as this could be the week one of them hits a big points total. Chelsea (Everton, Brighton), Man Utd (Leicester, Burnley) and Spurs (Burnley, Southampton) have slightly more difficult fixtures. It’s also worth noting that Morata is suspended for the game against Everton after picking up a yellow card during the week.


As always, feel free to share your own progress, suggest any players to look out for or provide any other useful comments below.

To show your support for the website and to keep it free: